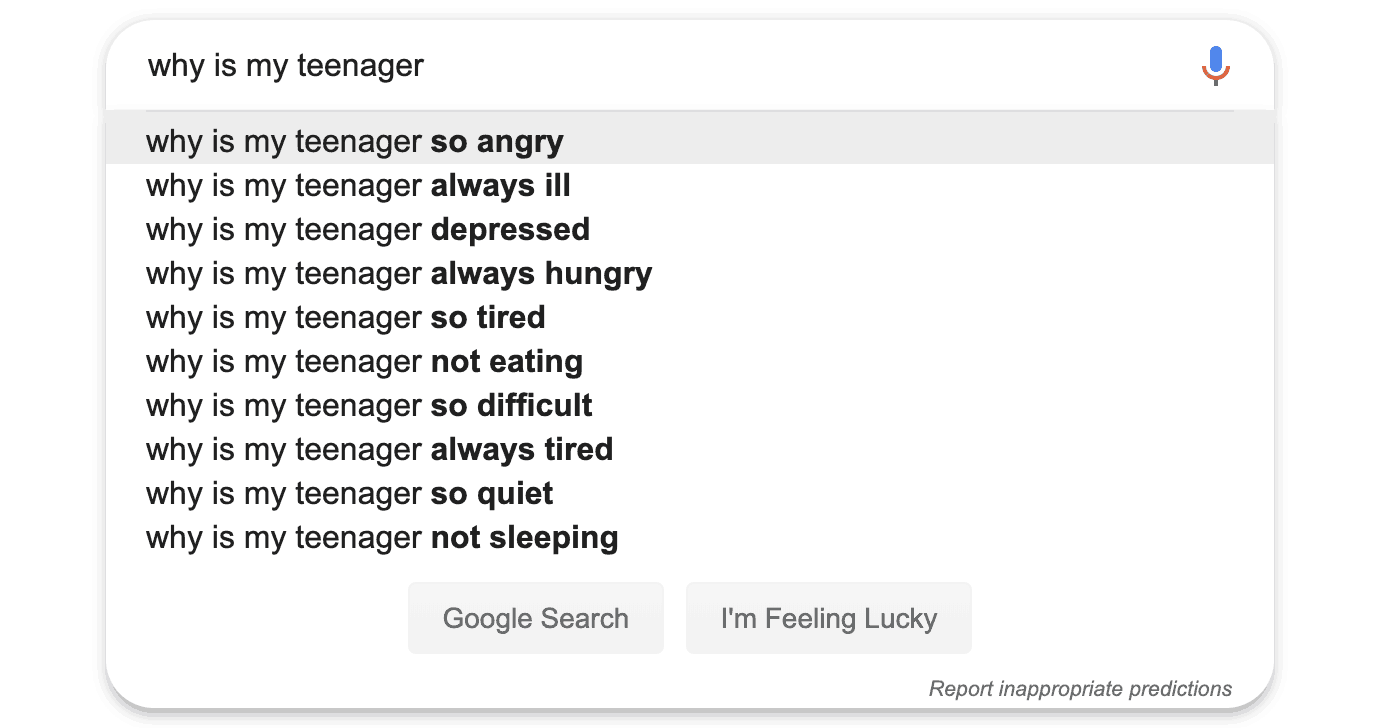 … but they will grow out of it (eventually)

I think Google has summed up the experience of parenting a teenager perfectly:

If it makes you feel any better, pretty much all parents go through this phase. Wondering what the heck they did wrong to create such a monster, feeling horrified at the way their teen treats them / their siblings, generally wanting to scream into a pillow…

Here’s what you need to remember about this ‘teenage’ behaviour phase:

Seriously though, it’s a frustrating thing to watch as a parent. Your well-adjusted, loving child is a distant memory. You’re fighting battles on a daily basis on subjects ranging from skirt length to Xbox usage to curfews.

They make decisions that we don’t understand, and get angry and argumentative at the drop of a hat. You don’t know where this behaviour came from.

The diagnosis? You’ve got a case of the teenager. And there’s no cure.

I could get really science-y on you here, but I’ll keep it straightforward.
Your child’s brain is having a massive growth spurt. It’s doing all sorts of vital development that turns your child into an adult. That takes time. And patience. (Oh so much patience.)

Meet some important bits of your brain:

The nucleus accumbens is all about seeking pleasure and rewards.
This of it as your ‘happy’ drunk* friend. The one who suggests the dodgy kebab place at the end of the night (even after what happened last time…). The same one who has to be talked out of getting a tattoo / snogging someone random / drunk-texting an ex.

Basically, if left unsupervised, the nucleus accumbens will make some very questionable choices.

The amygdala is the place where your ‘gut’ reactions come from – like fear and aggression.
You know the guy who gets a bit trigger-happy when drunk*? Who’ll start a fight because someone ‘looked at them funny’? That’s the amygdala.

*The reason this relates to drunk friends is that alcohol reduces the activity in the next section of the brain. The sensible section. The one that is NOT running the show in a teenager…

The prefrontal cortex handles your complex decision making.
It’s the designated driver of your brain. It looks out for the drunk friends we’ve talked about, and stops them doing anything too stupid. It makes plans, controls impulses, and can actually focus on what’s important in a situation.

Hang on, what’s all this got to do with my teenager?

The brain goes through a big clearout when you’re in your teens. It’s a bit like a bedroom – it wants to get rid of anything it doesn’t need any more (you know, the ‘babyish’ stuff), and make space for the new, grown-up stuff.

The brain does this by pruning away old connections (synapses). That lets the useful connections work better.

As the brain develops, it starts at the back, and works its way forwards. It clears out the old, unused synapses, and builds up the new.

That means that the nucleus accumbens and the amygdala are being developed before the prefrontal cortex.

Yup, your drunk friends are being left unsupervised on a weekend in Vegas. Be afraid.

In a teenager, this often means putting reward over risk, or misinterpreting situations.
For example:

Anything else I should know?

We’ve not even mentioned the dreaded hormones yet, have we?!

As we all learned at school, you have a massive surge of hormones during puberty, and these don’t just drive the physical changes. Oh no.

Ladies, I know I’m not alone in that I can be a tad bit irrational or irritable once a month.

I’ve had a couple of decades to get used to how this hormone imbalance affects my mood, and yet I’m still not capable of stopping it. (If you’ve got any secret tips, let me know!)

I know enough to warn my husband to batten down the hatches. For a teenager though, this is the first time they’ve dealt with this emotional rollercoaster. Plus, theirs lasts WAY longer.

Take a second to think back to when you were a teenager. What did you argue with your parents about? Would you be on the other side of that argument now as a parent? What questionable choices did you make that you now look back on with shame….?

We’ve all been through it, but it’s very different looking at it from the outside!

So what am I supposed to do??

Firstly, remind yourself on a daily basis not to take this personally.

It’s hard to do that when doors are slamming, or your teenager hasn’t actually said a word to you for days, but it really isn’t about you (most of the time).

If you can, try to keep communication lines open by picking your battles carefully. You might not like the dyed-black hair that’s appeared, but if you fly off the handle about this, then will they even tell you the big stuff?

A huge part of what they’re doing is learning to be their own person. They’re trying out different things to see who they are as an individual, and that means experimenting. They’re going to want to shock you with things, and push the boundaries to learn what is ok, and what isn’t.

Stand firm on respect, but do it the right way. As a parent, I can’t make my child respect me, but I can make them treat me with respect. The same goes for everyone else too.

I lead by example by not badmouthing people. (Well ok, maybe sometimes I mutter things about other drivers, but not to their face…). My children see that it’s ok to disagree with people, or not to like them, but it’s not ok to treat them badly.
That’s a non-negotiable for me.
Added bonus? It also helps avoid friction with teachers they don’t get on with!

We’ve also been pretty open about discussing things with our teenagers, however embarrassed they may have felt about it at the time. We hope that means they’ll have been given good advice about alcohol, drugs and sex. The alternative is that they get their information from the internet, or worse, from their mates.

Start with trust. Give them their privacy wherever possible, and then if your trust is broken, they’ll have to work to re-earn it.

While their brains are still developing, you’ll have to be their designated driver.
Bear in mind that your job here isn’t to constantly boss them around, just to steer them away from the really poor choices.

Part of their learning process is learning from mistakes. They’ll need to be allowed to make some – just keep an eye out for potentially dangerous or permanent mistakes, because that’s where you should be jumping in!

Think about it like this – when you drag your drunk friend away from the bad choice they’re about to make, they’ll probably argue. BUT, when they wake up the following day (and have sobered up) they’ll be pretty glad you stopped them.

It’s going to take a while until the effects of ‘teenager’ wear off your child. Once they do, they’ll be glad you were there to keep them safe and stop them doing anything too stupid.

It’s worth the wait.

If you want to know more about the science, there’s a nifty TED talk here: https://www.ted.com/talks/sarah_jayne_blakemore_the_mysterious_workings_of_the_adolescent_brain?language=en

I’d like more useful info and tips – send me the emails!